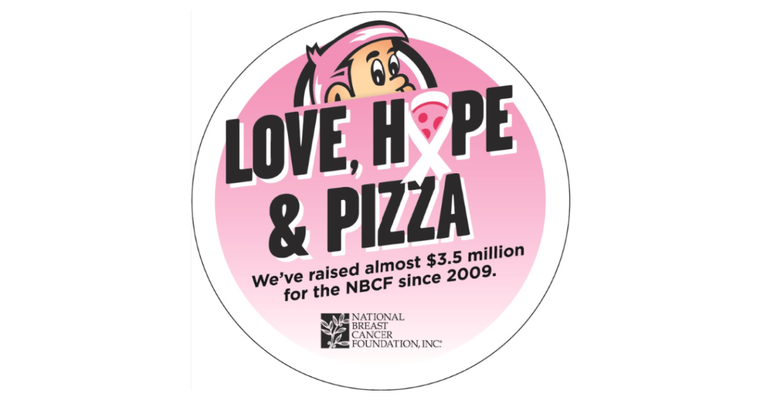 The pizza franchise has partnered with NBCF since the campaign first launched in 2009. To date, Hungry Howie's has raised more than $3.5 million for NBCF to support survivors as well as those currently battling breast cancer, by donating a portion of sales from its famous Flavored Crust pizza.

Through October 28, Hungry Howie's is offering guests a medium one-topping pizza for $1 with an online purchase of a large one-topping pizza at regular menu price. For every pizza purchased during Love, Hope & Pizza, Hungry Howie's will give back to NBCF. Additionally, customers will have the opportunity to make an additional contribution to NBCF during checkout by donating the change from rounding up their bill to the nearest dollar.

"It's through the support of our customers we're able to continue our partnership with NBCF for more than a decade. Since the start of Love, Hope & Pizza in 2009, the program has become a core component of the Hungry Howie's brand," Steve Jackson, CEO of Hungry Howie's, said in the release. "Every dollar raised is dedicated to the brave women, men and their families who are affected by this disease. Hungry Howie's is honored to drive increased awareness, encourage early detection and chance people's lives through everyone's favorite comfort food."

Founded in 1973, Hungry Howie's Pizza has grown to almost 550 locations in 21 states across the U.S.