Brent Armstrong didn't start his career in pizza knowing he wanted to own a pizzeria. With the support of his family and Little Caesars' corporate team, he now owns two franchises. 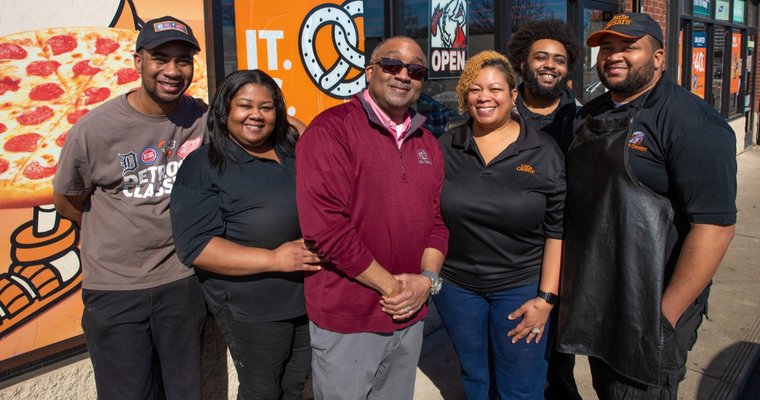 For many in the restaurant industry, owning their own restaurant is the end goal. Such was not the case for Brent Armstrong, who began his career at Little Caesars Pizza in 1985, the summer after his junior year in high school. He was just looking to earn some extra money to pay for his senior year activities.

After high school, his brother recommended moving up the ladder at Little Caesars, a career move Armstrong hadn't considered but "I was taken by the ones who applied themselves and worked hard," he said. "They got recognition."

Restaurants, he believed, couldn't pay the bills, could they? Armstrong was keen to find out. He attended a managers' meeting, and began to consider his next move. Armstrong eventually worked his way up from crew member to assistant manager, to co-manager to store manager, training manager, area supervisor and, finally, director of operations.

"Under the Little Caesars umbrella, I've pretty much done everything," Armstrong said.

Now, he's the owner of a Little Caesars franchise in Detroit, Michigan. In 2009, Armstrong earned his first store while still working for corporate. In 2016, he opened his second store in Highland Park, a city adjacent to Detroit, and he became a full-time franchisee. He currently employs about 65 people.

Armstrong was born in Detroit and said he loves his community. Before he franchised, two of his five children were already working at Little Caesars. "I don't know where you'll end, but you'll all start at Little Caesars," Armstrong told his kids. When he franchised in 2009, his entire family started to work for the company.

Armstrong said he knew he was ready to go from one store to two because he had a great support cast with Little Caesars and through the plethora of knowledge he'd obtained "working and growing within Little Caesars from being 16, 17 years old. The growth part wasn't even a thought for me. It was just like give me the ball and I'll score."

Opening his second store came easy thanks in part to Armstrong's five children and his wife, Rochelle.

"If push comes to shove, I have a whole crew who lives in my household," Armstrong said. "I have a whole team of employees if that needed to be the case."

Armstrong said he also had a lot of support from the community and the Little Caesars organization. The underlying family community is what drew Armstrong to the brand initially as a teen. It wasn't who you knew or your background that got you a franchise. It was hard work, integrity and dedication to the brand.

"It gives you the foundation and the platform to be successful," Armstrong added, "and to do what you really feel like you can achieve without bias. And I just found that to be true. I honestly just worked hard.

"I love Little Caesars. None of my kids look like they've missed a meal, and I tell them that's because of Little Caesars putting the bread and butter on the table daily."

If you've got the heart, Little Caesars has the means, Armstrong said.

His biggest challenge is creating an organization within an organization. He wants to provide a platform for others in his community who are just like him who seek out business opportunities or ownership. His personal growth goal is not more success for himself but to help others grow their own businesses in Detroit and achieve success, a move that he says is not commonplace in his community. "I have to continue to make that platform possible for someone else," Armstrong said. "I strive to achieve that every day."

When asked why he didn't open his own pizzeria after gaining so much real-world knowledge, Armstrong said being a franchisee affords him networking that's unparalleled. Everyone in Detroit knows Little Caesars and the Illitch Foundation (owners of the Little Caesars brand). This is especially true with the addition of Little Caesars Arena, home of the NHL's Detroit Red Wings and the NBA's Detroit Pistons.

"The whole brand is just positive and the support you get from the home office – you go into nothing blind," Armstrong said.

Little Caesars Pizza, a carryout and delivery concept, was already well situated in the industry when the pandemic hit, so Armstrong's sales doubled. People began to think differently about working, and working for one's self became more attractive.

Unlike other businesses that lost employees, Armstrong's stores stayed well-staffed, a testament to the commitment of family and the team members. No one was applying for positions, but he didn't lose anyone either.

With sales increasing, Armstrong said he and his family had to "get in the trenches, elbow to elbow with all our employees and support them, and really let them see that this is a family. When things are going rough, regardless of how rough it is, I'm standing right here with you, toe to toe, elbow to elbow. So whatever you go through, I'm going through it with you. And that really helped me through the pandemic."

Most of his five children as well as a grandson still work for Armstrong, many as assistant managers or store managers. He has support at the corporate level and at home, a fact for which he's grateful. Seeing the growth in people is Armstrong's biggest reward.

"The personal connection with customers is exhilarating because it's just so hands on," Armstrong said. "I get a lot of acknowledgements just for being black owned. People will say 'to be blacked owned, you guys are doing a really, really good job in the neighborhoods. Knowing you're appreciated and that you appreciate your people — it goes back and forth."